"One does not become enlightened by imagining figures of light, but by making the darkness conscious" C.G. Jung 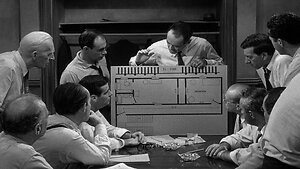 Recently, I watched Twelve Angry Men, which had been on my list of films to watch for sometime.
For those who haven't watched this film yet, I personally, found this absolutely gripping. It's a film that has stayed with me.

Briefly, the film is about 12 jurors from completely different backgrounds who have to decide whether a young Hispanic boy is guilty of the killing of his father. It starts off looking like a guilty verdict all round, but one man, played by Henry Fonda, stays on the periphery. Juror 8 is unsure and follows his conscience. This man isn't willing to just go along with the others. He begins to question the evidence and challenges the rest of the group. Each juror begins to consider the role, the evidence and the importance of their task.

This film highlights social inequality and prejudice. The psychological group dynamics are fascinating to watch as they play out.

It becomes evident through deeper reflection that something dark lives within each juror's psyche; an increasingly stark realisation of their own shadow self. The last juror finds himself going through a 'dark night of the soul' as he realises his guilty verdict has more to do with his relationship with his own son than the young man who is on trial.

Inner Child Workshop
In Search of Self
Dream Workshops